“...we seem, by our practice, to act on the wish that we could pass over despair or mortification and
​know only the exaltation of ascent. We seem to believe that we can be reborn without ever dying.”
~Rollo May

Opening Converation and Themes for the Seminar

“Every analysand being a poem more than a poet, but a poem that is impossible to read in its entirety."
​~Colette Soler

“Through its myths a healthy society gives its members relief from neurotic guilt and excessive anxiety."
~Rollo May

“I think about depth psychotherapy as the search for the wild god. This work best claims the name psychotherapy, that is the nurturing of the spirit or soul. Here the intent is to confront and incorporate the existential conditions of our being--among which, of course, is the ultimate unknowableness of being, the inexorable coming up against our limits in the midst of limitless mystery."
~James Bugental

“Human dignity is possessed by the person who is free and because of freedom is responsible for identity."
~Frank Ambrosio

“The possibility of self knowledge depends on trauma....
Inwardness develops not by escaping or resolving but by deepening the conflicts that define it."
​~Walter Davis

“We tell ourselves stories in order to live." ​
​~Joan Didion

“Unconsciously, the patient is the teacher par excellence."
​~Robert Langs

“The setting of analysis reproduces the early and earliest mothering techniques. It invites regression by reason of its reliability."
~Donald Winnicott

“Secured frames, in which all the fundamental, archetypal, deep unconsciously sought and validated ground rules are in place...
offer optimally healing and inherently supportive conditions for a therapeutic experience,
but they also evoke entrapping existential death anxieties."
​~Robert Langs

The Virgilian Narrative and the Therapeutic Relationship

“'O my dear guide, who more than seven times
Has kept me safe and saved me
from the great dangers I encountered

do not leave me now so undone!
and if they will not let us pass beyond,
let us retrace our steps together, quickly.'

To these words my guide replied: 'Have no fear;
No one can prevent our passage,
for a very great power has granted it.

Wait for me here . Comfort your weary spirit
and nourish it with good hope.
I will not forsake you in the underworld alone.'"
~Dante Alighieri, Inferno, 8.97-105

“Approaching the unconscious destitutes the subject yet summons it as well."
~Colette Soler

“...the patient who comes to therapy, he risks exposure to the lie.”
​~Wilfred Bion

​Shepherd: “I am on the brink of dreadful speech.”
Oedipus: “And I of dreadful hearing. Yet I must hear."
~ Sophocles, Oedipus Rex
​

​Guilt, Therapeutic Forgiveness, and the Incarnation of Hope

“There is an analyst when the analyzed subject, the one who has situated his very own horror of knowing, has moved to enthusiasm. Others, on the contrary, can move from horror to hatred....[and] from horror to forgetting."
~Colette Soler

“The only thing of which one can be guilty of  is of having given ground relative to one's desire.”
~Jacques Lacan
“To repeat: the capacity to forget, the ability to eschew desire and understanding,
must be regarded as essential discipline for the psycho-analyst. Failure to practice this discipline will
​lead to a steady deterioration in the powers of observation whose maintenance is essential.”
~Wilfred Bion

​“There is a listening that works this way: a listening that is responsible for creating what it hears--
​a listening, for example, with the power to cause or alleviate the very suffering it hears."
​~David Levin

“Psychoanalysis would seem to have as it's sole goal the calming of guilt.”
~Jacques Lacan

​Reworking the Relationship to Suffering

“Understanding, in turn, is receptivity and suffering.”
​~ Donna Orange

“I turned left with the same assured belief
That makes a child run into its mothers arms
when it is frightened or has come to grief....

But he had taken his light from us. He had gone.
Virgil, the gentle father to whom I gave
my soul for its salvation, had gone."
~Dante Alighieri, Purgatorio, 30.43-51

“Psychological  maturity is the capacity for conscious suffering...
​healing from the instinct of running from death.”
​~Carl Jung

“Does this mean now that I am freer than I was?
I do not know. I shall learn."
~Samuel Beckett

“...the first function of mythology: not merely a reconciliation of consciousness to the preconditions of its own existence,
but reconciliation with gratitude, with love, with recognition of the sweetness."
​~Joseph Campbell

“You can't transmit meaning to another. What you may give, however,
is the existential example of personal commitment to the search for truth."
~Viktor Frankl

" In spite of the consciousness of guilt . . . . One could say that the courage to be is the
courage to accept oneself as accepted in spite of being unacceptable."
~Paul Tillich

"All human nature vigorously resists grace because grace changes us and the change is painful."
​~Flannery O'Connor

​“. . . And yet one word
Frees us of all the weight and pain of life:
That word is love."
~Sophecles, Oedipus at Colonus

*The full itinerary for the week, including: breakfast and lunch schedules and optional activities, can be found on the General Information page.

​      *This selected bibliography represents sources of influence for the ideas presented in this seminar.
Register 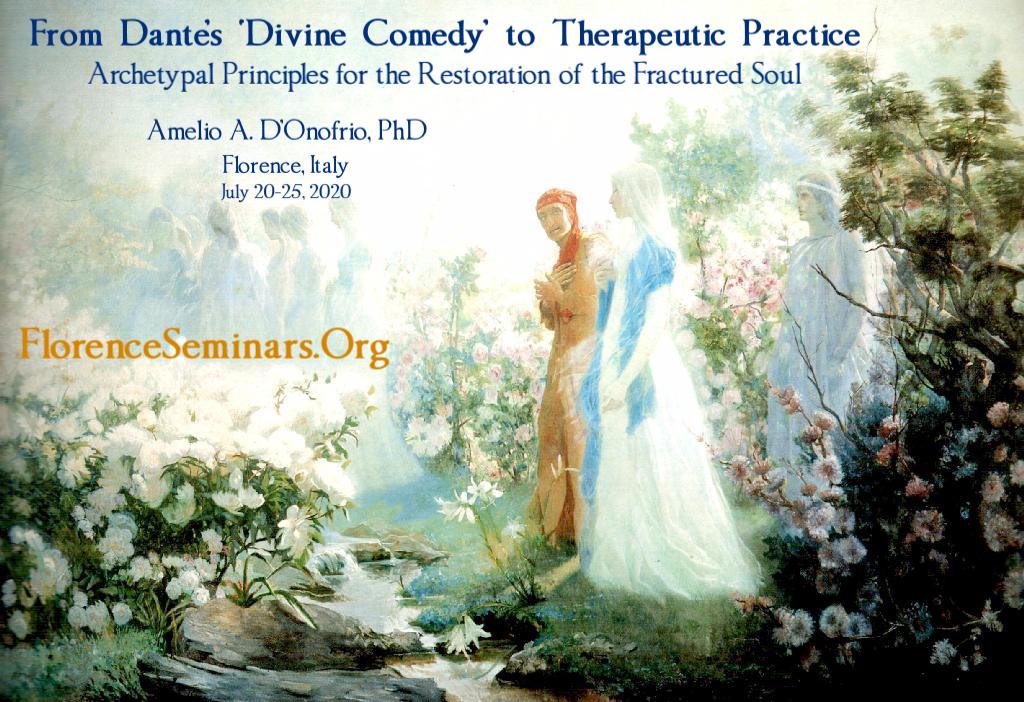